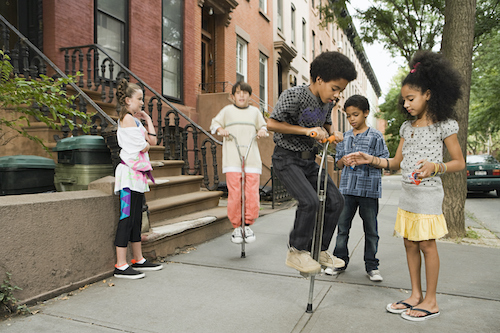 
But the “Just let them play,” during COVID-19 mantra rings hollow for economically oppressed families without supports.

The same households that don’t have the Internet to access curriculum and are at risk of being food insecure during COVID-19, also often don’t have toys or games.

When I spent two years as a home/hospital teacher in LA County’s San Gabriel Valley, I covered an area that included some of the most privileged and most economically oppressed families in LA. When you are working with children with low incidence disabilities (a severely disabling condition with an expected incidence rate of less than 1%  of total statewide enrollment in special education, for example, Traumatic Brain Injury), the racial and economic lines that occur in general education disappear. You work with children from different cities, different races, and different socioeconomic classes.

Home/hospital which is housed under Special Education looks like how general education was supposed to look like in Martin Luther King’s Dream.

I visited my students twice a week.

When I went to homes on the wealthy side of town, my bag of toys was a minor supplement. I spent a lot of time playing and socializing with young children who, because of various chronic illnesses and/or disabilities, rarely got to interact with other children or anyone outside their family. The students were always happy to see me and their primary caregivers; typically their mothers were always pleasant and supportive. The families often had nannies or maids, which made post-meeting sessions easy. I was typically offered a coffee and a pastry of some kind, and I was thanked profusely for helping their child access a combination of communication, language development, and socialization goals.

The homes of some of my more economically oppressed students were more chaotic. The houses were apartments and they were small and the toys, if there were any, were often broken. My bag of toys brought cheers and led to a relieved primary caregiver, typically the mother. Many times I got a younger sibling to play along, which the primary caregiver often thought was a burden, but I viewed it as an incredible help for me to support my student in the work of childhood that is play. During the post-meeting I typically reassured the mother that she was doing a great job and asked her if she had any suggestions of how I could do better or be more supportive of her goals. With these homes, I often left two toys as “homework” for the child and the sibling, a toy that you could play make-believe with and a cooperative game.

I told the primary caregiver not to worry if the toy got broken, and typically the toys I let them borrow came back in good condition.

Toys and games should be given as homework during this era of COVID-19. Give every student from Universal PreK through 3rd grade three toys and a game package.

And when we can go back outside, we should also discuss a play social contract standard for children. Every urban neighborhood should have 50 square feet of park space for every child under 8 to play, and the US Census can determine that number.