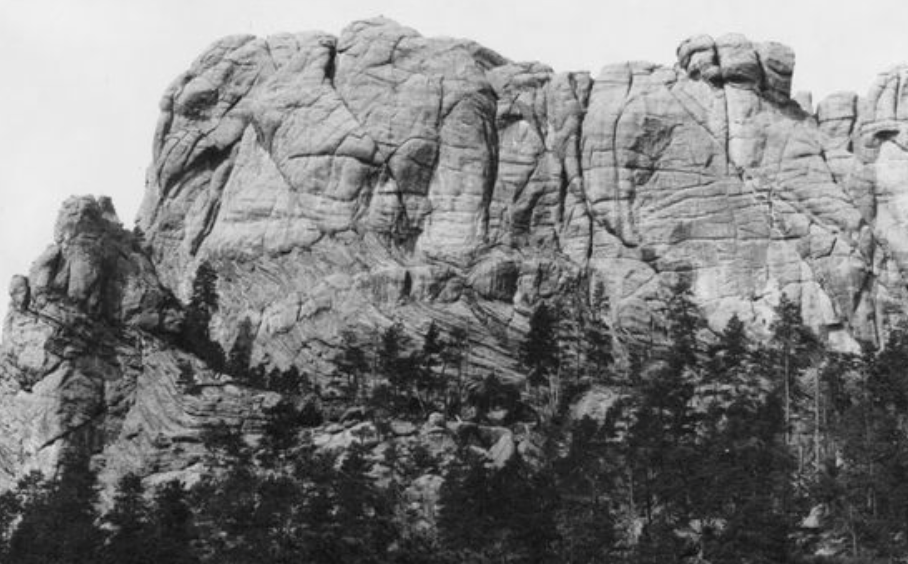 In the Paha Sapa on the stolen occupied land of Očhéthi Šakówi, renamed South Dakota by white colonizers there was a sacred hill among the other hills. In this hill was a magnificent sculpture carved by a being who was not man. Mount Rushmore Native American

It looked like faces, not white face, but six distinct faces and I asked my grandfather what happened to Tȟuŋkášila Šákpe, and he said, “Whatever white people tell you to do, do the opposite.”

How the Tȟuŋkášila Šákpe on Paha Sapa on Očhéthi Šakówi land, became Mount Rushmore on the Black Hill in South Dakota is a story of the cruelty of white nationalism in this stolen country run by people who very much remember and understand all the evil that they do and their obsession with attempting to put historical periods on their evil.

Manifest Destiny (coined by Journalist John L. O’Sullivan) was a purview from the 19th Century that stated that white men had the right to steal, rape, mine, and murder their way through North America.

How they were able to do this was via paperwork called treaties. I’m sure the treaty thing works well among white people, but with us, it works a bit differently. If you have had the misfortune of being colonized, settled, or enslaved by Europeans, you know that one of their favorite modus operandi is power. They enforce their power with lying pens and keyboards. They love power and they love making their power official with a lying official bullshit document that they reinterpret —if it ends up being even a little bit unfavorable to them.

So the lying racist power-hungry colonizers and their setter sacrificial tools arrive in Sioux territory in the early 1800s. They (the US) sign a treaty with the Cheyenne (Só’taeo’ o, Tsétsêhéstâhese), Sioux, Arapaho, Crow, Assiniboine, Mandan, Hidatsa, and Arikara Nations to guarantee settlers safe passage via the Oregon Trail if the US government promises to not overrun their land with white people and the white people who do come through, respect the natural resources.

And of course, the US broke that treaty immediately.

Gold was found in Kansas Territory, which instituted the Pike’s Peak Gold Rush, and you know once settlers smell money, there is no stopping them. There were some even some documents that stated, “Hey we improved that dump. They have a farm slash coffee shop now. They should be grateful that we’re here — Black Lives Matter.”

Then in 1864, Colonel John M. Chivington of the US Army murdered 500 mostly women and children of the Cheyenne and Arapaho because they were in the way of gold. All parties stated a renegotiation of terms was necessary.

Which brings us to the Treaty of Fort Laramie 1868 and how the Black Hills was stolen.

This treaty stated many things, but two things firmly established were the ownership of the Paha Sapa (Black Hills) by the Oceti Sakowin (Sioux) and the formation of the Great Sioux Reservation.

But the United States broke it again. General Custer illegally went into the Paha Supa under secret orders from President Grant, and while he was there, he found gold. The US tried to renegotiate, but the Sioux Nation said no. The US used the 7th Calvary of the US army. The US army was handed their ass by the Lakota, Northern Cheyenne, and Arapaho led by Crazy Horse (Tashunka Witco) and Chief Gall who had been inspired by a Sitting Bull (Tȟatȟáŋka Íyotake) vision, in the Battle of the Little Bighorn aka Battle of the Greasy Grass aka Custer’s Last Stand, but the victory was one of a long war and eventually, the white men won which allowed them to break the 1868 treaty illegally and steal Paha Sapa and mine it for gold.

To add the most significant dose of disrespect, the US government on October 4, 1927, had Gutzon Borglum (who had a few years prior took a commission from the Klu Klux Klan to scrape General Lee into a mountain in Georgia) scrub the grandfathers’ faces from Paha Sapa and replaced them with Washington, Lincoln, Grant, and Roosevelt.

Lincoln who ordered the largest mass execution in US history with the order to hang 38 members of the Dakotas for killing settlers who were trying to kill them.

Roosevelt who said, “This continent had to be won. We need not waste our time in dealing with any sentimentalist who believes that, on account of any abstract principle, it would have been right to leave this continent to the domain, the hunting ground of squalid savages. It had to be taken by the white race.”

And finally, Grant, who was the direct mastermind of the theft of Paha Sapa.

“The Grant administration launched an illegal war and then lied to Congress and the American people about it. He had no legal reason for seizing the Black Hills (Paha Sapa), so he invented one, convening a secret White House cabal to plan a war against the Lakotas. Four documents, held at the Library of Congress and the United States Military Academy Library, leave no doubt.”

Mount Rushmore was a malicious, petty act of disrespect. The US knew the significance of the Tȟuŋkášila Šákpe (The Six Grandfathers); they did that to demoralize the community.

Support the Native Americans in their fight.

Blast those murderers’ faces off that hill and give the Native Americans back Paha Sapa.