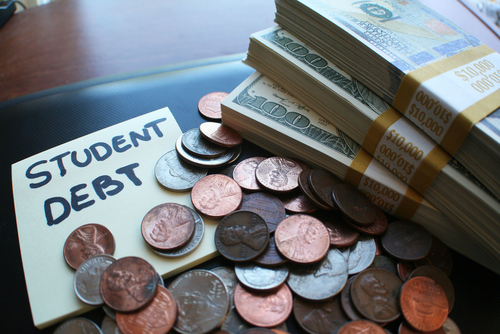 The US has consistently gotten white people to vote against themselves is racism. Here is the story of how petty racism got student loans the size of a home loan.

From 1970 to 1980 college graduation rates for both groups almost doubled.

Enrollment peaked in 1980 and then began to fall.

During the mid-1980s, there was a huge decrease in federal dollars utilized to support college students.

This was a 180-degree change in policy when compared to the 1950s, 1960s, and 1970s and the govt provided financial assistance (meaning tuition wasn’t a mortgage payment, because the feds thought it was worth subsidizing) to anyone who wanted to go to college, so what happened?!

In 1980 Reagan became President and along with his education Czar William Bennett decided everyone wasn’t going to college.

The idea of Black and Latinx people being educated, well….see up until around the 1980s taxes paid for a lot of college, so of course, as this somewhat benefitted non-white people (now that we had rights on paper) Reagan and Bennett were able to spin that into a welfare queen kind of fairytale that translated into a bunch of colored people stealing education that was created for the benefit of white people.

This laid the groundwork to defund higher education.

White people from all classes, forgetting that their children also went to these colleges, for the most went along with the program, because you know—the Blacks, they get everything…..

Rightwing politicians cut billions of dollars out of Pell Grants and other supports for higher education and moved them to bank-based federal loans to burden the individual.

This began the trend of locking the poor and working classes of all races into the chains of student debt.

It also changed US colleges from being places that were often the foundation of social change and thought —to places where more and more the focus became on cost and working for the highest bidder.

Propositions like 13 in California and 2 ½ in Massachusetts continued the bloodletting of our public colleges and the funding that was left went to prisons and crime prevention.

By the aughts in many states funding for the prison industrial complex surpassed spending on higher education.

But was it just race or a coincidence?

We all know the answer to that, but let us look at an interesting study.

Many public colleges use performance-based funding. A study by Nick Hillman, an associate professor of education at the University of Wisconsin at Madison stated according to Inside Higher Education, “minority-serving institutions in states with performance formulas on average lose ‘significant funding’ on a per-student basis compared with other colleges in those states or with minority-serving ones in states without performance funding.”

So much for equity and wanting a “diverse’ college experience.

In the 2001 paper, “Why Doesn’t the US Have A European-Style Welfare State” it states:

European countries are much more generous to the poor relative to the US level of generosity. Economic models suggest that redistribution is a function of the variance and skewness of the pre-tax income distribution, the volatility of income (perhaps because of trade shocks), the social costs of taxation, and the expected income mobility of the median voter. None of these factors appear to explain the differences between the US and Europe. Instead, the differences appear to be the result of racial heterogeneity in the US and American political institutions. Racial animosity in the US makes redistribution to the poor, who are disproportionately black, unappealing to many voters.

I hope at some point the left, the right, the masses get that racism, oh yeah it is a distraction, but it’s a pretty damn effective distraction.

Carlson, S. (2016). When college was a public good: As the population has grown more diverse, support for grand efforts like the GI bill to open doors to higher education has dwindled. coincidence? The Chronicle of Higher Education.