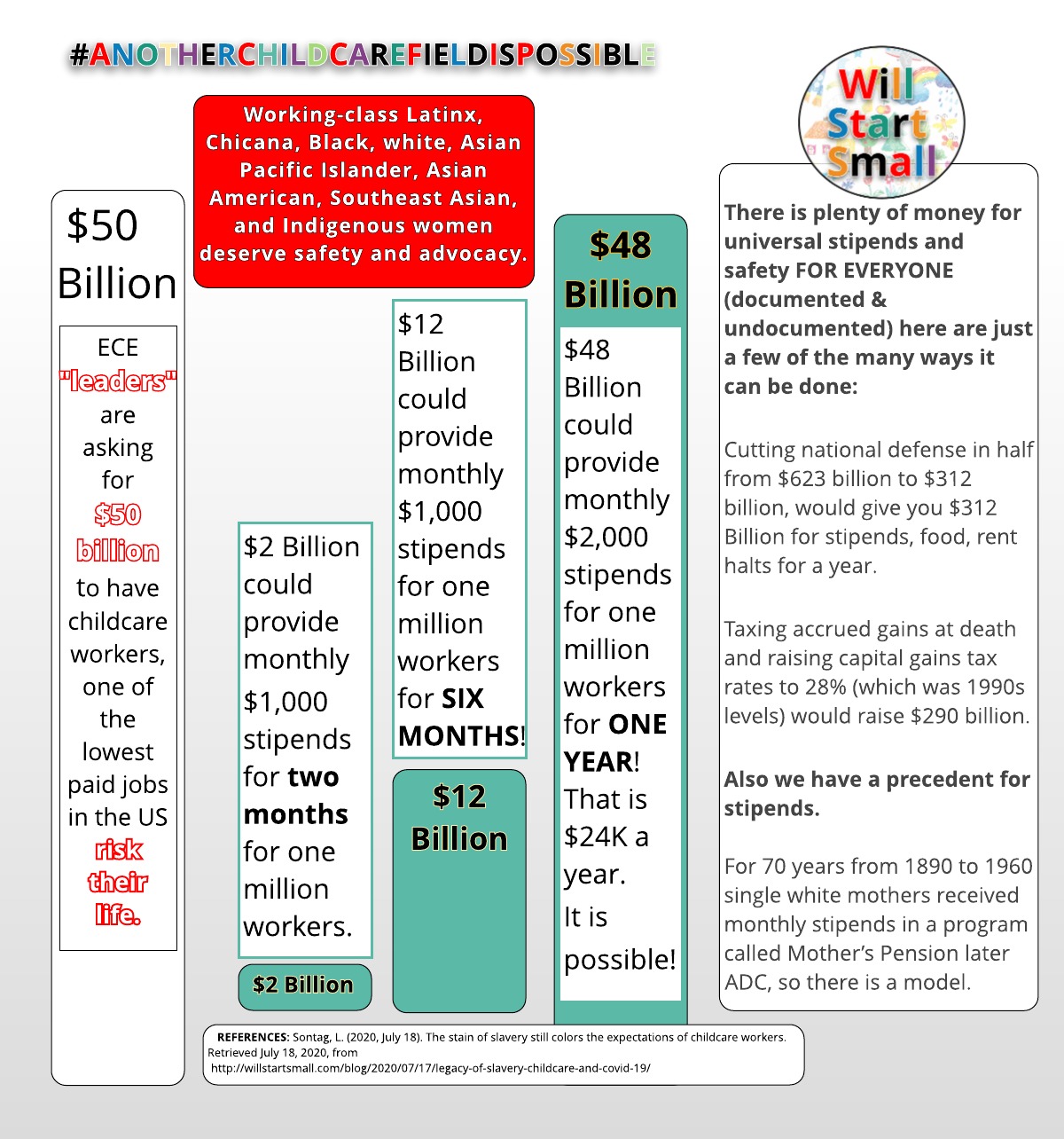 “Black women’s main jobs historically have been in low-wage agriculture and domestic service.  (1) Even after migration to the north during the 20th century, most employers would only hire black women in domestic service work.  (2) Revealingly, although whites have devalued black women as mothers to their own children, black women have been the most likely of all women to be employed in the low-wage women’s jobs that involve cooking, cleaning, and caregiving even though this work is associated with mothering more broadly.” — EPI.

In the 80%-white, college-educated, K-12 teachers, there will be a debate if teachers and students will & should risk their lives in the fall, in childcare there is none. In childcare it is already presumed that the women who work there and use the services will of course risk their lives, their children’s lives, and their families’ lives for one of the lowest paid jobs in the United States.  In the CARES package passed in March there was a 3.5 billion dollar subsidy for low income families childcare.

Poor women are expected to work and support middle class women in their domestic duties during the pandemic.

Poor women who make so little that they qualify for subsidized childcare are expected to go to work.

Two early childhood education systems formed after chattel slavery ended in the United States. One system was set up for the recently freed & formerly enslaved and the newly arrived immigrants. The point of this system was to warehouse the children of the poor, so that their mothers could cook, clean, and watch the children of the rich for low wages.  The other was preschool, that really had nothing to do with childcare, but it was a sort of “Mommy & Me” program for the Victorian and Edwardian era. Legacy of slavery childcare and COVID-19

In order to understand this, we have to go back into the racialized history of childcare and motherhood.  President Theodore Roosevelt stated in 1911, “Surely poverty alone should not disrupt the home.”  in reference to his continuing to support the Mother’s Pension that was instituted in 1890.  But of course he only was referring to white women.

From 1890 and then to the Aid to Dependent Children (ADC) Program that began in 1935 as part of the New Deal and through the 1960s white women were given benefits with no work requirements to care for the developmentally appropriate upbringing of their children. Legacy of slavery childcare and COVID-19

Both of these for the most part white only benefit programs were given to white women whose white spouses had died or were unable to work. White children, it was felt by our society’s leaders, needed to have individual, one-on-one attention.  It was the most developmentally appropriate option and the alternative institutionalized, child-care centers in urban cities were not appropriate for these white children.

ADC was denied to Black women until the Civil Rights Movement in the 1960s. In 1962 when Black women were allowed to receive benefits the name of ADC became Aid for Dependent Families and Children (AFDC) to be more inclusive.

As Black women were allowed to access the AFDC, which came to be known as “welfare”, the government began to make many administrative requirements on social structure and personal choices.  If you were on welfare, you weren’t allowed to have a man in the house.   That meant you were having sex out of wedlock and they didn’t want to encourage that kind of immortality in Black women.

As Black women became qualified for AFDC, the value of the benefits dropped. Between 1970 to 1994, benefits dropped by 47% when adjusted for inflation.  But the outrage of Black women receiving subsidies continued, so a change in the AFDC was instituted.

A work requirement and and name change was instituted. Bill Clinton changed “Aid for Families of Dependent Children” to the “Temporary Assistance for Needy Families and the Personal Responsibility and Work Opportunity Reconciliation Act” of 1996. This act instituted the changes that Bill Clinton campaigned on in 1996, “to change welfare as we know it.”

“Temporary Assistance to Needy Families”, known as TANF, began to bypass individual help and instead pass out block grants to support women in getting off the doles. Childcare was one of the beneficiaries of those grants.  Small or large businesses who hired people on a WOTC target programs such as SNAP, ex-Felon, & TANF received a Work Opportunity Tax Credits (WOTC).  When a company hires individuals of specific WOTC target groups it can get between $2,400-$9,800.

TANF recipients are forced into low-wage, two-steps from slavery jobs in industries such as childcare.

“We can’t get rich doing each other’s laundry.”  But it IS profitable to manage such transactions.

It’s a genius scheme which silences, disempowers, wastes time, and is highly developmentally inappropriate for children and degrading to the adults.

A single parent working a horrible job with no money, would be better off at home with support for them to raise their child, without being given punitive consequences for partaking in the very natural act of procreation.

TANF is why childcare is open during a pandemic.

TANF is why you have predominantly middle class feminists advocating for them to go out there and risk their lives for “the economy” in some bizarro world where people are forced to risk their lives, so other poor people can serve coffee and then it is viewed as equity and social justice.

Slavery, then segregation, and now TANF (all based in anti-blackness), is what keeps childcare workers wages low, it is what kept these workers out of the 1935 Social Security Act, it is what continues to keep these workers out of the teachers unions, it is what discourages the field from organizing for such basic rights such as not having to risk their lives during a pandemic, because if one woman stands up there will be one that is forced by the state to take her place.

TANF is new slavery for women.

Abolitionist and antiracist work is fighting for stipends, food vouchers, and rent halts for all workers, not fighting for someone to be your nanny, cook your food, and type your letters.

In 2018, we spent $623 billion on national defense, which is approximately 3.5 percent of our gross domestic product.

Batchelder and David Kamin (2019), using JCT projections (2016), estimate that taxing accrued gains at death and raising the capital gains tax rate to 28 percent would bring in $290 billion between 2021 and 2030. In the 90s this was approximately the tax rate.

Cutting just half our war budget and making the wealthy pay their fair share, would be more than enough to support not only the most economically oppressed, but everyone with a universal income, universal housing, and universal health care. We can eliminate this cruel means-testing system rooted in racism.

The money is there, even in COVID 19, this idea that we can’t advocate for these women, because of the economy is false, there is money, but is there a will to fight for a field long associated with slavery, segregation, and “The Help.”