Dearest colleagues, who work directly with children in the field of early childhood education, I am sorry. I apologize for the leaders in our field who advocated for you to risk your lives for minimal pay under the guise of social justice, but in reality, were just advocating to sacrifice you to the gods (and goddesses) of capitalism. Childcare being open during COVID19 is racist.   Our leaders had the math. Our leaders had the math and the science from other countries and it is NOT safe for childcare to be open. It is the height of irresponsibility that middle-class women and men who work from home decided that instead of stipends and supports for rent that you should go out there and be sacrificial workers for the good of the economy. 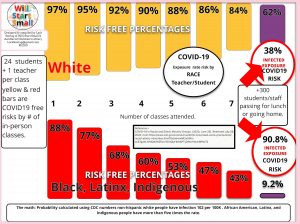 Respected early childhood organizations did not confer with you (because you don’t have a union, they have made sure of that) or doctors or scientists, they conferred with business owners to come up with a plan that has kept some of you working for minimal pay through one of the most dangerous times in the past 100 years.   They talk about antiracism, but look at their actions. They talk about equity, but how is this equitable?   Antiracism is not a workshop. Antiracism is not a booklist. Antiracism is making policies that keep those who are at the most risk owing to policies based in racist and classist policies —safe.   And my white working-class sisters, do not think you are not included in this conversation. We see you and you are invited, and we will always have a seat on the blanket for you.   It is no mistake that people forgot to value your life in this conversation of eduçators. Your job in the United States has always been seen as sacrificial:   “During the 19th and early 20th centuries, two tiers of early childhood programs evolved in the United States. One tier, rooted in the social welfare system, was driven by a desire to reduce welfare payments—with scant attention to the needs of the child. This system of custodial “group child care” for low-income families was in sharp contrast to the second tier—child care rooted in the education system that provided “preschool education,” mainly for children of the middle and upper-middle classes.”   Past Caring: A History of US Preschool preface by Judith E Jones report by Emily D. Cahan These people do not care about you. The people who make decisions do not care about your children, and they do not care about your families, which is why they helped keep childcare open, while all other educators closed their doors.  The same people who want to professionalize the field, sold you out like a piece of meat to the highest bidder.  They even made hashtags about how you had to stay open, because of the economy. Your leaders signed you up FIRST to die and then had the nerve to call it social justice.  I remember when the early childhood hashtag to save the field went out, I stopped sharing it after it the horrifying realization that it meant to save the business of childcare and to hell with the women who work in the field.    My platform is not very big, but I promise you that we’re going to make a better early education field where working-class Black, Latinx, Indigenous, Pacific Island, Southeast Asian, and Indigenous women aren’t used as backs to stand for the middle and upper-middle classes.  True ANTIRACIST work would view KEEPING YOU SAFE during a PANDEMIC as a priority over a book list.  You deserve better. Childcare should close WITH stipends, rent credit, and food vouchers. No one can work if you can’t work, and they cannot starve us all.  Our tax dollars are to pay for situations like an emergency.  A worldwide pandemic where Black, Indigenous, Latinx, and in some areas Southeast Asian and Filipinos are contracting COVID19  at FIVE times the rate of white people is just that emergency.  Be well. Call out tomorrow. Your life and your family’s life is worth more than your job.  Don’t let them tell you that you don’t have a choice. You run this country.